When “I Quit” is the Best Thing to Do

We’ve all heard the phrase, “Winners never quit, and quitters never win.” But sometimes, a situation operates firmly in the gray area; you’re not sure what the “right” thing to do is because it’s not as clear cut as you would hope it to be. So, you may find yourself hanging on to a situation because of a promise you made, fear of letting go, fear of failure, or the nagging memory of the phrase “quitters never win.”

And this is a mentality taught to young kids, too. Though done with good intention, kids are often taught not to quit when things get tough, to stay focused and work through frustrations – but the lesson often stops there. There’s often little discussion, if any, about what is too hard, too frustrating, too damaging. Of what comes after the line has been crossed. When it’s ok to say “I quit.”

There’s lots to unwrap here, but I want to focus primarily on the action of letting go because this is an important distinction. I think many of us believe “I quit” translates to “I give up.” But I think it also lends itself to mean “this is enough” or “I’m letting go now.”

I came across a powerful image that really resonated with me (see right). Can you relate? I certainly could. There have been more than a few situations in my life where letting go was the better decision, even though it took a lot of strength and confidence to first admit it to myself before I could make that move. For example, I took a job that was not directly aligned to my abilities thinking it would be an opportunity to grow and try new things. It was, however, the opposite. With little guidance and a challenging management system, I was looking for a way out after just three months. But, I convinced myself that leaving a job after three months would reflect poorly on me and my career history; no one would take me seriously if I left a job after just 90 days – that’s barely enough time for the traditional three-month review for new employees!

So, I stuck it out. And got sick. Very sick. The stress of the job did some significant damage both mentally and physically. The final straw came on Thanksgiving Eve, approximately nine months after I took the job. And that’s when I quit. Within 1 week, I felt better. And 1 month after that, I was back to my normal self.

Think about the thankless and unhealthy relationships you have been in, and how long it took to finally quit. Think about the workplace when you held onto a low performing employee, who, after much coaching and a lot of support time, still choose to do as little as possible in the job. Think about the unprofessional or inappropriate advances that another person makes toward you and you just think it’s part of how things are done.

In the end, quitting the job, the relationship, the workplace may be the best thing for you. But to get there, you have to first allow yourself to realize that there’s a line between giving up and letting go. You have to decide where that line is.

Take Action
Think about a situation you are currently in that you may find frustrating or challenging. Imagine how you want things to be instead. Now, how will you get from where you are to where you want to be? What action(s) will be required to make that dream a reality?

Parents – consider talking to your children about what is too hard, too frustrating or too damaging. Help them understand when quitting is ok and not ok. Help them define their line between giving up and letting go.

Consider reading Learning How to Be Self-Managed

The Imposter in the Room (it’s not you)

Raise your hand if you ever feel like you don’t belong for some reason. You’re not smart enough. You don’t work hard enough. You are just lucky and don’t deserve to be here.

This is called Imposter Syndrome. It is strikingly powerful and very real. I can recall a few instances in my life when I thought, “this was just luck; it has nothing to do with me.”

I watched a TED-Ed video recently about Imposter Syndrome and the closing line was, in my opinion, the most powerful and should become everyone’s mantra: “you have talent, you are capable, and you belong.”

As coaches, we work with clients to build confidence, to realize that life is what it is and it’s up to you to make it what you want it to be. Many times, the lack of confidence or self-doubt our clients experience is rooted in the Imposter Syndrome, frequently the result of their individual performance blocks.

Feeling like an imposter is real, but it can be quickly managed when you do the following two things:

The next time you feel yourself questioning whether you’re worth it, or if you belong, Stop and Notice. Consider why you feel this way. Is it rooted in truth? Or is it your belief? You may find that one of the most frequent reasons why you feel like an imposter is because you’re comparing yourself to others.

Take Action
If you have 15 minutes to spare, I strongly encourage you to watch the TEDtalk “Do you ever feel like you’re not enough?” It is a thought-provoking presentation that brings up things we encourage our clients to think about, as well. And when it’s done, Stop and Notice. What’s working in your life and where is change or improvement needed? Consider the actions you can take to make a change and choose one – just one – action you can start to implement to move toward your change.

Still not convinced it’s not something everyone experiences? Check out this article by Beth Monaghan, CEO and Co-Founder of Inkhouse, an integrated PR firm, in which she shares her own experience with Imposter Syndrome.

Consider watching Being Uniquely You

Find Your Voice. Be the Change.

Over the weekend of March 24-25, 2018, millions of people – led by student activists –walked, marched and carried signs demanding greater and saner gun laws. It took a series of horrific events to unify them into a formidable powerhouse, focused on inspiring change.

This is a learning experience on a number of levels. For the purpose of this post, I’m going to focus on action. On taking a stand. On finding your voice. On becoming the change you want to see in your world.

Too many of us sit back and wait for others to step up and take action on issues or situations that are important to us. But there are so many places in your day where you have the ability to define what you stand for and then actually stand up for what you believe. It can be something seemingly simple like developing the technology rules for your house to manage your kids’ connection time. It can be something a little more challenging, like standing up to a bully at school or at work (yes, there is actually more bullying going on in the workplace than at schools). It can be something that is deeply important to you, like mobilizing to do something about the sugar in our foods or the number of plastic water bottles floating in our oceans. 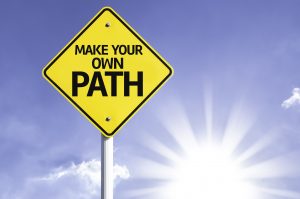 So what stops us?

I applaud the student movement that sees the value of life as a greater value than having automatic weapons – and for having the courage, the confidence and the resilience to demand something better, share what they think and hold us all accountable – for taking a stand. Whether you agree or disagree with their message, they are holding themselves accountable for being the change.

As Winston Churchill said, “To each there comes in their lifetime a special moment when they are figuratively tapped on the shoulder and offered the chance to do a very special thing, unique to them and fitted to their talents. What a tragedy if that moment finds them unprepared or unqualified for that which could have been their finest hour.”

When you get tapped by an event, person or circumstance, will you step up or step back? Will you raise your voice or go down to a whisper?

The world is built by the people who are right here, right now. Stand up for what you think is right. Commit to what makes the world a better, happier, kinder, more loving and safer place. Then find your role in it and take a stand. You could be the one who changes things for the better.

Important Questions from a Coach:

Any cookies that may not be particularly necessary for the website to function and is used specifically to collect user personal data via analytics, ads, other embedded contents are termed as non-necessary cookies. It is mandatory to procure user consent prior to running these cookies on your website.